What is ADAS?
Our Advantage

Trucks’ 4-in-1 radar
Large vehicles tend to have high mortality rates in accidents, and this is attributed to “blind spots” easily caused by the car structure. Since the car bodies of big trucks, cement trucks, and container trucks are generally higher than average, the front, the sides, and the rear become “blind spots”. In addition, turning radius of big truck is also a reason for fatal accidents.

1、 The 4-in-1 truck radar solves the problem commonly seen in the cameras sold on the market, which have blind spots and are prone to bad weather and dirt. In addition, our 4-in-1 truck radar has high penetration and diminishes all blind spots. It allows all-day detection on the truck’s surroundings, can precisely determine obstacles in blind spots, and reminds drivers of potential hazards.

2、 By installing two radars on the same side of the truck, it not only detects obstacles from far away, but also at the same time can precisely detect obstacles in the interior blind spot at close range when the truck is turning. This solves the many blind spots these heavy trucks have long suffered from.

School buses’ pedestrian detection radar
In the US, federal legislation provides protection to and regulation on school bus safety, school bus production, traffic privileges, and driver recruitment. According to Cub Elecpart’s own estimates, there are around 450,000 school buses in the US, and around 25 million students take school buses to schools. It is also estimated that 46,000 new school buses are produced each year, which makes it a stable business.
Cub Elecpart is eyeing on such business opportunity, and has so far developed a type of radar for school buses that can detect the presence of children. This provides further safety protection for children going to and leaving schools. 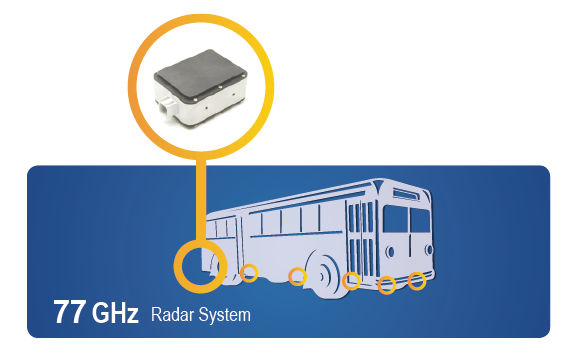 2、 The driver’s seat is equipped with radar monitor that always tells the driver where students who have walked into alert area currently are.

3、 The radar’s exterior design has taken into account of student safety and can avoid bumping accidents.