Tire Pressure Monitoring Sensor(TPMS) is a device inside the car tire that instantly detects tire pressure and the specific communication signals by RF mode transmitted to a receiving device inside the car. The driver is able to know the current status of the tire, further reducing the probability of accidents. In addition to safety, TPMS also improves fuel economy average about 2%(saving fuel consumption) and reduces carbon dioxide emissions(environmental protection). This is one of the important reasons why national legislation for TPMS standard was implemented. 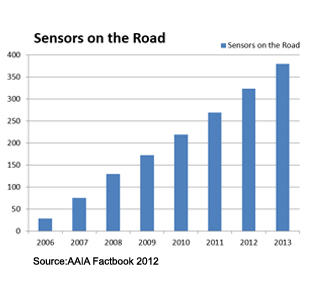 Every TPMS sensor will eventually fail due to a dead battery. The battery life in a TPMS sensor is approximately 5-7 years and is not serviceable. When a TPMS battery fails, the TPMS dash light will illuminate alerting motorists that a Service Repair is required. Currently there are over 150 million sensors on the road with batteries over 3 years old and that number is growing. The United States is the first legislation TPMS as standard equipment in the world and in 2007 as a 100% standard equipment. From battery life expectancy projections, 2012~2017 is estimated to have the
replace tide peak. New car sales in North America over the last calculation are about annual average 50 million units of tire pressure sensor. The tire pressure sensor market can be estimated in U.S. District each year to maintain steady growth. European Union since 11/2012 initiated legislation to promote the TPMS, In 11/2014 it will provide the tire pressure sensors fitted as standard to the EU 10 million cars sold annually estimation. The market demand is about 40 million units. In Asia, TPMS legislation ripe, Japan, Korea, China and India, have taken a similar legislative process, a conservative estimate of Korea in 2014 and Japan in 2015, China in 2016, India in 2019, the tire pressure sensor as standard equipment, then the annual tire pressure sensors on the Asian market demand is about 160 to 220 million, it will become the world's largest TPMS new markets.
﻿