Tire Pressure Sensor (TPMS, Tire Pressure Monitoring System) is a device inside the car tire that instantly detects tire pressure and temperature and the specific communication signals by RF mode transmitted to a receiving device inside the car. The driver can know the current status of the tire, further reducing the probability of the accident. In addition to safety, because TPMS can improve fuel economy average of about 2% and reduce 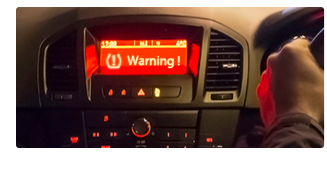 carbon dioxide emissions, fuel consumption and environmental provincial. This is one of the important reasons why national legislation implementing TPMS is fitted as standard.

In May 2000, the U.S. National Highway Traffic Safety Administration (NHTSA) contacted a well-known car maker and its tire supplier about the high incidence of tire failure on their serial car models fitted with these tires. The car maker investigated and found that several models of 15-inch tires(ATX, ATX II, and Wilderness AT) had very high failure rates, especially those made at the specific tires plant. This was one of the leading factors to the closure of this tire plant.

A product recall was announced, allowing the specific car model owners (and owners of its stablemates) to change the affected tires for others. Many of the recalled tires had been manufactured during a period of strike at that tire branding. A large number of lawsuits have been filed against both car maker and tire maker, some unsuccessful, some settled out of court,

and a few successful. Lawyers for the plaintiffs have argued that both car maker and tire maker knew of the dangers but did nothing, and that specifically car maker knew his specific car model was highly prone to rollovers. After the recall (which was linked to more than 100 deaths from rollovers following tire tread-separation), pushed the Clinton administration to legislate the TREAD Act.
﻿